We, Tour-India take you on Karnataka Heritage Tour in which we cover Mumbai, Bangalore, Mysore, Hassan, Hampi, Aihole, Pattadakkal, Badami, and Goa. Our Karnataka heritage tour is of 14 days that cover every interesting place of these cities. The itinerary of this interesting tour is as follows:

On arrival to Mumbai airport you will be greeted by our representatives and transfer to hotel for relaxation and overnight stay. 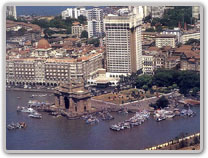 In morning we take you on Mumbai sightseeing cover all the important places of Mumbai such as Gateway of India, and Elephanta Caves, which is known for its stone carving and vegetable painting and the painting of this cave still glows as it was paint recently. This cave is dedicated to Lord Shiva. Other attractions of Mumbai that we covered include Marine Drive, Prince of Wales Museum, ISKON Temple, Mahalaxmi temple, Hare Rama & Hare Krishna Temple, and the famous Juhu Beach. We will move you to hotel for the night stay.

We transfer you to airport to board the flight for Bangalore and on reaching Bangalore you will move to hotel for relaxing. Later we take you on Bangalore sightseeing in which we cover Tipu Sultan palace, Bull Temple, Government Museum, and Ulsoor Lake. You return to hotel for the overnight stay.

We drive you to Mysore in morning and on the way you are taken to Tipu Sultan's Tomb at Sirangapatnam. On reaching Mysore you are transfer to hotel for relax and after lunch we take you on Mysore sightseeing covering places such as Lalitha Mahal Palace now turned into 5 star deluxe hotel, Mysore Palace, Chamundi Hills and the Brindavan Musical Garden. We transfer you to hotel for spending the night. 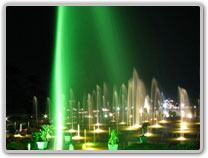 We drive you to Halebid for the sightseeing and take you to Hoyasaleswara Temple astounding for its wealth of sculpture details. The temple walls are covered with endless variety of Gods, Godessess, animals, birds, and dancing girls and the no two facets of the temple are the same. Later we drive you to Belur, which is 17 km from Halebid and take you to Shennakeshava Temple, which is one of the finest examples of Hoysala architecture. These extra ordinary temples are worth visiting.

We drive you to Hampi in the morning and on the way we make you visit Chitradurga, which is famous for fort and Ganesha Temple. This city is named after the Fort of Seven Rounds. After reaching Hampi you are transfer to hotel for relax after a long drive. You are move to hotel for the night stay.

In morning we take you to Virupaksha Temple, which is located at the base of the Hemakuta Hill and is considered as a sacred place since 7th century. Earlier it was a small shrine but was later enlarged by the Vijaynagara kings to the Hemakuta Hill temples, Narsimha statue, Zenana enclosures, elephant stables, Bal Krishna temples and King's palace. In the evening you are free to relax and spend the night in the hotel. 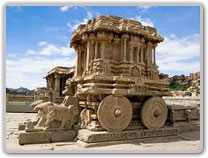 We drive you to Badami in the morning and on the way we take you to visit Aihole, which is 51 km before Badami situated on the bank of the Malapravha River. Aihole was the first capital of the Chalukyan Empire and just outside Aihole you will notice two temples of 6th century, which was undiscovered but recently a French archaeologist discovered with the help of the local villagers. The City Wall remains tells us about the importance of this city as inside and outside this wall there are nearly hundred of temples of different sizes reflecting the Chalukyas experimenting with temple architecture. The Mahapravha river bank have Nagara styled temples of North India as well as Dravidian styled temples of South India. Some of the temples also reflect flavour of Muslim architecture. Pattadakal is another town that lies on the bank of the river Malapravha and is a World heritage site renowned for its temples of 7th and 8th centuries. Here there are ten temples reflecting nagara style of North and Dravidian style of South and some temples have a blend of both the styles. However Vijayeshwara temple built in the honour of Lord Shiva is a fine example of southern architecture. After this exciting visit you are moved to Badami and transfer to hotel for relaxing and overnight stay.

We take you on Badami sightseeing in the morning, which was once the capital of Chalukyas and is now renowned for several rock cut and structural temples of 6th and 7th centuries. Foundation of this historic city was laid by Pulakeshi I and was beautified by his son Kirtivarman. Apart from temples Badami caves is also world renowned, which is a group of four cave temples that have been carved out of hill opposite Badami Fort. This Badami Fort is strategically located on the top of the hill and encloses large granaries, treasury impressive temples. The oldest temple among this group of temples is Malegitti Shivalaya, which is dedicated to the benign aspect of Shiva as the garland maker. In evening you are free to involve in your favourite activities and return to hotel for the overnight stay.

We drive you to Goa early morning and transfer you to hotel for relaxing and overnight stay at the hotel.

In your 4 days / 3 nights Goa stay we let you explore the alluring beaches like Candolim, Cavelossim, Calangute, and Baga along with Mandovi River. Apart from the beaches, Goa is also renowned for Churches such as the Basilica of Born Jesus that have the remains of St. Francis Xavier, St. Augustine Church having eight chapels, Our Lady of Immaculate Conception, and the largest church of Goa St. Cathedral, which is dedicated to St. Catherine.

A complete free day is provided to you to explore the true excitement and charm of Goa.

In morning you are free to indulge in your favourite activities and in afternoon we transfer you to airport to board the flight for Mumbai. On arrival to Mumbai you are move to hotel where you can relax and on time you will be transfer to airport the board flight back home.