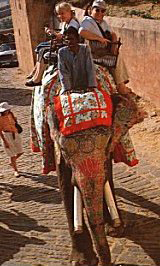 Our Tourist Permit Car / Coach with English / Multi Lingual License Guide will report at your Hotel or Residence at 0900 hrs. Start your tour of Jaipur, drive 11 kms out of the city to reach the Fort of Amber, over here you have choice of reaching the fort on Elephant Back or by open jeeps, though elephant ride is recommended because the Kings at there time use to travel on Elephant back & will give you the same feeling of the golden era visit the Amer Fort & Palace & several chambers & ancient temples in the premises of the fort. After this wonderful experience, we will drive back to the city of Jaipur to continue our sightseeing tour comprising of City Palace Complex, Hawa Mahal – the Palace on winds specially made in the honour of Royal Ladies of the bygone era to watch the processions & other festivals from here without being seen from the eyes of the local crowd. Later visit the Royal Observatory & Albert Concert Hall. Later in the day visit the famous Galta Temple also known as Valley of Monkeys, Birla Temple of Pure White Makrana Marble & Gardens of Sisodia & Rani Sati. After the sightseeing drive back to your Hotel / Residence.

Jaipur is a city where royalty still lives in the grandeur of its palaces, where fighting for the honour of the clan has never been a need but a way of life, and where treating guests as gods has been a tradition from time immemorial. The city is located at a distance of around 258 km from Delhi and 232 km from Agra, making it a part of the famed Golden Triangle tourist circuit of North India. Jaipur got its name from its founder Sawai Jai Singh (1693-1743), who had the vision to create a meticulously planned city as his capital. All the houses in the old city are painted pink, including the famous Hawa Mahal, thereby giving the city its alternative name, the Pink City.

Jaipur offers a plethora of touristic attractions to the traveller. The City Palace in the heart of Jaipur is known for its blend of Rajasthani and Mughal architecture. Not far away is the Central Museum with its large collection of woodwork, jewellery, costumes, brassware, and pottery. Another monument near the City Palace, Jantar Mantar, is the largest of the five observatories built by Sawai Jai Singh. The Hawa Mahal or the Palace of Winds was constructed for the royal ladies to watch the royal processions without being seen. Amber Fort, situated just outside the city, is perhaps the most beautiful example of Rajasthani forts and gives a grand view of the city down below. Other attractions include the Jaigarh Fort, Birla Mandir, and Sisodia Rani Ka Bagh.

Jaipur is also the base for exploring some nearby towns and cities of Rajasthan. Ajmer, situated around 130 km south-west of Jaipur, is a pilgrim town renowned for the tomb of Sufi Saint Hazrat Khwaja Moinuddin Hasan Chisti. In its vicinity is Pushkar, another pilgrim town famous for the annual camel fair. Kishangarh is renowned for its miniature paintings while Roopangarh houses a fort built by Roop Singh

The City Palace is now converted into a museum, except a small portion that is still used by the royal family of Jaipur. Built in the fortified campus style, the palace covers almost one-seventh part of the city. One of the major attractions in the museum is the portion that is devoted to the arms and ammunition used by the royal family in the past. Other important attractions are the Textile and Costume Museum, Art Gallery, Chandra Mahal, Mubarak Mahal, and Diwan-i-Khas and Diwan-i-Am.

Located in the Ram Niwas Garden, the Central Museum or Albert Hall is a mixture of pillars, arches, and courtyards adorned with murals. There is a huge collection of objects displaying different facets of Rajasthani culture and history. There are miniature paintings, ivory carvings, costumed mannequins, and shields depicting scenes from the Hindu epics, among others.

Strange though it may seem, this most famous landmark of Jaipur is not actually a palace but a series of sandstone screens. This pink structure was constructed so that the ladies of the palace could watch the royal processions without being seen by any outsider. This sandstone edifice was named Palace of Winds after the many brass wind vanes that adorned it until 1960s.

This largest stone observatory in the world has a very interesting story behind its construction. Sawai Jai Singh, the founder of five observatories in India including this one, was a great admirer of developments in science and technology, especially astronomy. Before constructing this observatory, he sent his emissaries to all corners to the world, who returned with many manuals of cutting-edge technology including a copy of La Hire/’s Tables. He built the structures following every details given in the manual, but at the end, he found to his astonishment that the observatory was 20 seconds more accurate than that given by La Hire. Situated near the gate of the City Palace, the observatory has 18 large instruments, many of them still in working condition.

Standing tall over a small hillock overlooking the Pink City, Amber is the classic romantic Rajasthan fort-palace. Amber today is nothing but a reflection of the glorious past of the fierce Kachwaha Dynasty that ruled over this region from 12th to 18th century. Man Singh I started the construction of this fort in 1592 and, perhaps, it was the defence that topped his priorities before constructing this fort. The rugged walls of this fort may not look beautiful from outside, but the interior is a virtual paradise and painted scenes of hunting and wars adorn the walls along with precious stones and mirrors set into the plaster. Half the fun at Amber Fort is the walk from the road to the fort with majestic views of the surrounding valley. An elephant ride up to the fort is also an unforgettable experience.

Situated in the north of Jaipur, the Jaigarh Fort is structurally similar to the Amber Fort. The only exception is that it houses the mighty Jaivana, the largest wheeled canon in the world. Other attractions in the Jaigarh Fort include three water tanks, a museum, and breathtaking views of the city below.

Also known as the Laxmi Narayan Mandir, the Birla Mandir, situated in the south of Jaipur, has been built by wealthy Birla family, one of the largest industrial dynasties in India. This white-marble structure has three domes, each styled according to different approaches to religion.

The terraced Sisodia Rani Ka Bagh (the Garden of Sisodia Queen) is situated on the Jaipur-Agra road at a distance of 6 km from Jaipur. The garden was created by the queen of Jai Singh II as an escape from the court intrigues. The landscaped gardens and murals of the life of Lord Krishna, decorating its interiors, are breathtakingly beautiful.

Ajmer was founded in the 11th century by Ajaydev, a local Rajput ruler. The city is famous for the dargah (tomb) of Sufi Saint Hazrat Khwaja Moinuddin Hasan Chisti, whose Urs is celebrated every year in the seventh month of the Muslim lunar calendar. Pushkar, a small holy town of Hindus near Ajmer, is now famous for its camel fair that attract the tourists from all over the world.

The miniature paintings of the Kishangarh School developed in the mid-18th century under the patronage of the royal family of Kishangarh. The hallmark of these paintings is the sharp profiles, slanted eyes, and aquiline noses that make them distinctively different from other paintings of the same genre in India. The main attractions of Kishangarh are its fort and Phool Mahal (Flower Palace), now converted into a hotel.

The Roopangarh Fort was constructed by King Roop Singh of Kishangarh in 1648 exclusively for defence. Originally a nine-turreted fort, new additions were continuously made to it in couse of time. The different styles of architecture can be distinctly observed in the fort Kishangarh and Roopangarh are both situated at a distance of around 100 km from Jaipur

This small town with its ruined palace and old Jain temples is situated around 12 km south-west of Jaipur. However, more than its architecture, the town is famous for its block-printing and paper-making traditions. Chipa Basti is the place where you can watch the printers in workshops doing screen and block-printing.