You will be greeted on arrival at Delhi International airport by ITS representative, you will be transferred to your prebooked hotel in Delhi, a brief on your tour by our representative & exchanging of tour documents, relax & overnight in Delhi 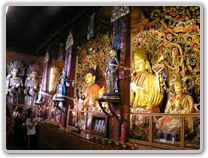 An early breakfast at 0730 hrs is recommended so that you can start your journey to the capital city of Rajasthan by 0830 hrs. Reach Jaipur by 1400 hrs, transfer to hotel, day free to relax after the drive. Evening we will take a driving tour of Jaipur city & visiting the famous Temple of Goddess Galta also known as valleys of monkeys due to large number of monkeys found in the Temple Complex, drive pass through the Sisodia gardens & visit the Temple of Birla – made out in the best of Makrana pure white marble. Later you will be driven to Chokhi Dhani – An ethnic 5* resort with an ambiance of village though this resort is packed by locals but the fun is that you get a chance to experience Indian & specially Rajasthan culture over here with live folk dance & music, puppet shows, camel rides & also you will enjoy the tradition of eating food by seating on the ground & tasting the ethnic Rajasthan cuisine. Later transfer to your hotel for overnight in Jaipur.

Enjoy breakfast at the hotel & start your sightseeing tour of Jaipur by 0900 hrs, drive 11 kms out of the city to reach the Fort of Amber, over here you have choice of reaching the fort on Elephant Back or by open jeeps, though elephant ride is recommended because the Kings at there time use to travel on Elephant back & will give you the same feeling of the golden era visit the Amer Fort & Palace & several chambers & ancient temples in the premises of the fort. After this wonderful experience, we will drive back to the city of Jaipur to continue our sightseeing tour comprising of City Palace Complex, Hawa Mahal – the Palace on winds specially made in the honour of Royal Ladies of the bygone era to watch the processions & other festivals from here without being seen from the eyes of the local crowd. Later visit the Royal Observatory & take a peep into the markets of Jaipur known for the superior quality of Handicrafts, Arts, Gems & Jewellery. Rest of the day is kept free for individual activities, relax & overnight at the hotel in Jaipur.

After an early breakfast leave for Agra by 0830 hrs enroute enjoy bicycle rides in the National Park of Keoladeo very famous for housing more than 385 species of migratory birds, later we will drive to Agra enroute visiting the city of Fatehpur Sikri built by the Mughal Emperor Akbar but later shifted to Delhi due to scarcity of water in Fatehpur Sikri the most importance places to see in Fatehpur Sikri is Buland Darwaza, Panch Mahal, & Shrine of Shaikh Salim Chisti. Proceed to Agra & transfer to your prebooked hotel.

After breakfast take a sightseeing tour of Agra visit the 7th wonder of the World – The Great Taj Mahal built by Mughal Icon Shah Jahan in the memory of his beloved wife Queen Mumtaz. After admiring the Taj Mahal you will proceed to Agra Fort & visit its Chambers of Kings, Common Man, the prisons & also enjoy a panoramic view of the Taj Mahal from here. Later drive to Itimad-ud-Daulah Tomb which is also referred as mini Taj for its superb marble inlay works gifted by Mughal King Jehangir to his wife in honour of her Parents. Evening visit the Tomb of the Great Mughal Emperor Akbar at Sikandra & rest of evening is kept free to walk in the markets of Agra & exploring the skills of artisan at the Handicraft factories. After dinner checkout & transfer to railway station to board the train for Varanasi at 2230 hrs, overnight in your coupe of air-conditioned train.

Assistance on arrival by our Company’s representative in Varanasi at 0800 hrs, transfer to your prebooked hotel. After freshen up start the tour of Varanasi visiting Saranath – to see the Chaukhandi Stupa, Ashok Pillar, Dhamek Stupa, Dharamika Stupa, Dhamek Stupa, Archaeological Museum also visit the deer park and Bodhi Tree where Lord Buddha perched his First Sermon. Later in the day visit the temples of Varanasi - the Golden Temple dedicated to lord Shiva, the Durga temple dedicated to Goddess Durga. Interestingly the Durga Temple is also known as the Monkey Temple due to the large number of monkeys found in the Temple complex. Evening you will enjoy unforgetfull tour of the holy River Ganges and see the various Ghats with people ritually cleansing their sins. While on the boat you will also see the cremation ceremonies of dead bodies as per Hindi Rituals. Later drive back to hotel for overnight.

Early morning enjoy the boat ride in River Ganges again to see the morning rituals at the Ghats of Varanasi. After breakfast day free for shopping or individual activities. Later checkout & transfer to airport to board the flight for Kathmandu at 1500 hrs, assistance on arrival in Kathmandu at 1600 hrs, transfer to hotel. Evening free to walk in the markets of Thamel, relax and overnight in Kathmandu. (Meals: Breakfast)

Morning visit The Pashupatinath Temple, situated on the banks of River Baghmati around 8 km from the city, is one of the holiest Hindu shrines. Also visit Guheshwari Temple near Pashupatinath is considered as the place where Yoni of Shiva’s consort Sati fell when she was cut into pieces by Lord Vishnu. Later visit Boudhnath which is one of the largest stupas in the world. Afternoon relax, and early evening visit Patan is a spiritual city with Durbar Square in the centre and many stupas, shikaras, and temples. Bhaktapur is again a royal city where most of the attractions revolve around Durbar Square and the Palace of 55 Windows. Overnight at the hotel in Kathmandu.

Morning checkout and transfer to airport to board the flight for Lhasa, a one hour flight will take you to the capital of Tibet "Lhasa" - at an altitude of 3,650 mts, is situated on the north bank of Kyichu River. Lhasa in Tibetan means "Place of the Gods", the residence of the Dalai Lama. Life is unhurried, its people jovial and yet remaining staunchly independent. Overnight at the hotel.

Morning visit the Jokhang Temple, situated in the heart of Old Lhasa, it houses Tibet's most precious religious relic, a golden Shakyamuni Buddha which was brought as a gift by the Chinese Princess Wen Cheng on the occasion of her wedding to the Tibetan King, Songtsen Gompo. Surrounding the Jokhang Temple is the bustling Barkhor Market place which is the religious and social focus of Lhasa. Later in the day visit the Potala Palace, this legendary palace built atop a single hill is synonymous with Tibet by the first foremost king Songtsen Gompa. It was expanded to its present structure during the 17th century by the 5th Dalai Lama. This 13 story 1000 room citadel served as the headquarters of the former "church-state" of the Tibet and was home to successive Dalai Lamas, who from the latter half of the 18th century used it as their Winter palace.

Morning drive to Drepung Monastery, 8 Kms west of Lhasa - said to be the largest monastery in the world, housing over 10,000 monks. It was founded in 1416 by the disciple of Je Tsonkhapa, founder of the Yellow Hat Gelukpa sect of Tibetan Buddhism. The second, third and fourth Dalai Lamas lived and were entombed here. Drepung in Tibetan means "Richmond". Also visit the Sera Monastery, 5 Kms north of Lhasa, Sera setting is one of Lhasa's prettiest monasteries. Once a community of more than 5,000 monks resided here and was virtually extinguished by the Chinese. The restored monastery sits below the brow of hill on which Tsonkhapa built a hermitage and spent several years mediating. One of the monk’s disciples began building Sera in 1419, completing it a few years later. Overnight at the hotel.

Day free to explore Lhasa on own, one can many optional excursions from Lhasa. Overnight at the hotel in Lhasa.