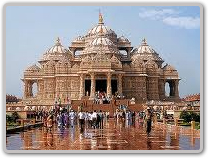 After breakfast take a sightseeing tour of Old & New Delhi. Morning visit Old Delhi:The important places in Old Delhi include the majestic Red Fort, the historical Chandni Chowk and if time permits you can visit Raj Ghat the Memoir of Mahatma Gandhi. Afternoon visit New Delhivisit the Rashtrapati Bhawan, the one-time imperial residence of the British viceroys; the India Gate, a memorial raised in honour of the Indian soldiers martyred during the Afghan war; the Laxmi Narayan Temple, built by the Birlas, one of India’s leading industrial families; Qutab Minar, built by Qutub-ud-din Aibek of the Slave Dynasty; and the lotus-shaped Baha’i Temple.

After breakfast day free for individual activities, transfer to airport to board the flight for Kathmandu AT 1340 HRS, assistance on arrival in Kathmandu at 1530 hrs, transfer to hotel, evening free to relax, overnight at the hotel.

Morning visit The Pashupatinath Temple, situated on the banks of River Baghmati around 8 km from the city, is one of the holiest Hindu shrines. Also visit Guheshwari Temple near Pashupatinath is considered as the place where Yoni of Shiva’s consort Sati fell when she was cut into pieces by Lord Vishnu. Later visit Boudhnath which is one of the largest stupas in the world. Afternoon relax, and early evening visit Patan is a spiritual city with Durbar Square in the centre and many stupas, shikaras, and temples. Bhaktapur is again a royal city where most of the attractions revolve around Durbar Square and the Palace of 55 Windows. Evening free to visit the market of Thamel, overnight in Kathmandu. 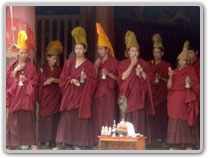 Morning transfer to airport to board the flight for Pokhra at 0900 hrs, assistance on arrival in Pokhra at 1000 hrs, transfer to lake side hotel. After freshen up take a sightseeing tour of Pokhra visiting Davis Falls, Binde Basini Temple, Mahindra Caves, Seti George and Phewa Lake. Evening free to relax at the hotel, overnight at hotel.

Day free to take country side treks or bird watching tour accompanied by guide & packed lunch. Early evening return to the hotel, evening free to relax at the hotel. Overnight in Pokhra.

After breakfast checkout & transfer to airport to board the flight for Pokhra at 0900 hrs, assistance on arrival in Kathmandu at 1000 hrs, time free till connecting flight at 1410 hrs for Varanasi, assistance on arrival in Varanasi at 1510 hrs, transfer to hotel. Relax for some time & take an excursion tour to Sarnath – 10 kms visit the deer park and Bodhi Tree where Lord Buddha perched his First Sermon. Drive back to Varanasi, evening free to relax, overnight in Varanasi.

Early morning at the time of sunrise take a boat ride on the River Ganges and see the various Ghats with people ritually cleansing their sins. While on the boat you will also see the cremation ceremonies of dead bodies as per Hindi Rituals. After breakfast proceed on a tour of the temples of Varanasi visiting the Golden Temple dedicated to lord Shiva, the Durga temple dedicated to goddess Durga. Interestingly the Durga Temple is also known as the Monkey Temple due to the large number of monkeys found in the Temple premises. Overnight at the hotel in Varanasi. 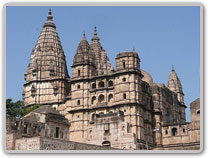 After breakfast visit Eastern group of Temples and visit the Jain temples of Parsvanath, Adinath, and Shanti Nath. Also visit the temples of Vamana and Brahma/Hanuman both dedicated to lord Vishnu. Later checkout & drive to Jhansi, enroute visiting Orchha, take a sightseeing tour of Orchha: Orchha once the capital of the Bundelas, Orchha is now just a village set amidst a complex of well preserved temples and palaces. It was built by Bir Singh Deo in 1531. Take a sightseeing tour of Orchha visiting Jehangir Mahal - the largest of the palaces , the Raj Mahal with its murals and the Raj Praveen Mahal built near a garden, You would also visit Dinman Hardaul`s palace with its interesting story. The temples of Orchha are highly preserved. The two main temples are the Ram Raja Temple and the Chaturbhuj temple.Later proceed to Jhansi, on arrival transfer to railway station to board the fully air-conditioned train to Agra at 1745 hrs, assistance on arrival in Agra Railway station, transfer to hotel. Evening free to relax, overnight in Agra.

After breakfast take a sightseeing tour of Agra covering Sikandra to see the Tomb of Mughal Emperor Akbar, Agra Fort, Itimad-ud-Daulah Tomb & the Grand Taj Mahal where one should spend some quality time. Evening free to venture into the handicrafts market of Agra, overnight at the hotel.

After breakfast checkout and drive to Jaipur for 5 hours, enroute visiting Panch Mahal, Buland Darwaza & Shrine of Shaikh Salim Chisti in the old Mughal Dynasty called Fatehpur Sikri. Later proceed to Jaipur, on arrival transfer to hotel. Day free to relax, Later in the evening visit Birla Temple of White Marble and at the time of dinner visit Chokhi Dhani - an ethnic resort serving Rajasthani & Continental cuisine with live music and puppet shows in an ambiance of an ethnic village. Return to the hotel for overnight.

After breakfast take an excursion tour to Amber Fort - 11kms, and enjoy elephant ride to ascend/ descend this great fort. Later take sightseeing tour of Jaipur visiting City Palace, Hawa Mahal made for the ladies of Royal Family to see the Processions from this Palace and without being seen from the people, and Jantar Mantar Observatory all within the vicinity of City Palace. Rest of the day free for shopping or individual activities, overnight in Jaipur.

After breakfast day free for shopping & individual activities, checkout late in the afternoon & drive to Delhi, on arrival transfer to International airport to board the flight back home.